THE FUNDAMENTALS OF STAYING COMPOSED

At some point or another, all of us deal with some sort of pressure filled situation. I believe that how we respond to pressure situations is what makes the difference in our performances. Arousal is described as “generalized physiological (somatic) and psychological (cognitive) neural excitation varying on a continuum from deep sleep to extreme excitement” (Williams & Krane, 2015). I personally believe that arousal, like the definition states, is a generalized increase of energy, what I mean by this is that it happens when something important to us is about to happen. Arousal is a neutral energy that is not good or bad, it prepares us for performance. How we interpret the energy is where things can get tricky. Anxiety is the negative interpretation of that energy, we start to think of failing and who we will let down, or the mistakes we have made etc. These get the mind racing about everything that is around you except for the most important thing, the actual performance. I like to use the word “activation” as the positive aspect of arousal, viewing this energy as activating feels more productive and ready to deliver your performance just like you have practiced for it. The funny thing is, is that all three of these phrases have the same symptoms. Whether you are anxious or activated, the symptoms of arousal are typically increased heart rate, sweaty/shaking hands, increased breathing. It is the interpretation of the event that changes our thoughts and what makes us start to over think things.

Keeping the right perception and level of arousal is the challenging part. For athletes, there are so many moving parts to a competition. Let's take soccer as an example, there are 22 players on the field, at least 3 referees and line judges, coaches, sub players, and fans in the crowd. With all of that going on it is insane to believe you have full control over every aspect of the competition. What you do have full control over is how you respond to events. Looking at the inverted U theory developed by Yerkes and Dodson (1908), we see that as arousal increases, performance does as well. We then hit a level where we have personally found the correct level of arousal for our performance, the optimal level. This is, whether you realize it or not, where all of your best performances come from. This area of peak performance is when you may not even realize you are playing; you are totally automatic. You hear people describing athletes as “in the zone” or “in flow state”, that is this zone and where you want to live during performance. But sometimes we continue to get to worked up and that arousal level continues to increase. As the chart shows, when arousal continues to increase after that zone of peak performance, it tends to be detrimental to performance. This can happen in many ways, maybe an official makes a bad call, our opponents are getting the better of us, or maybe we have made a couple of mistakes. Our emotions start to ramp up and create too much arousal. The chart shows a smooth decrease in performance, but that is not always the case, sometimes you will see a sharp and large drop in performance. 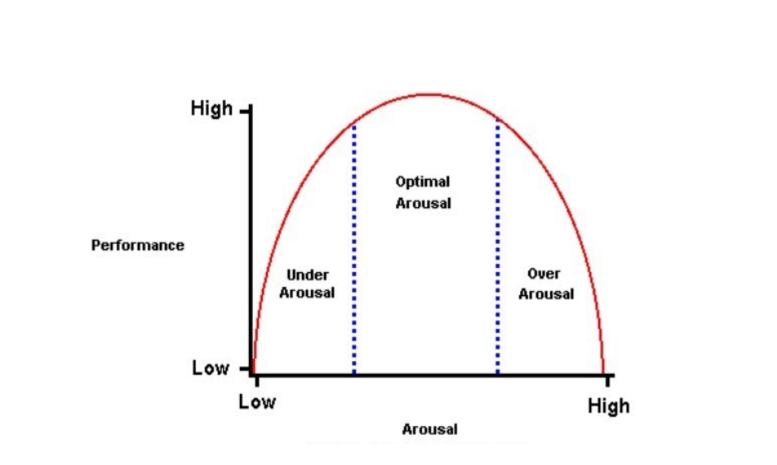 We want to stay in that optimal level of arousal, where it aids our performance. The level we are looking for is individually based as well on a person to person basis and by sport. For instance, a basketball player may want a high level of arousal to get ready for performance, where as a golfer would not want the same level. They want to be calm so they can make sure they are seeing everything about their shot. Here is a little activity you can do to find your optimal level of arousal.

Think about one of the best performances you ever had, think about what physically happened in the performance and also how you were feeling. Common answers are, “I felt confident”, “In complete control”, “I couldn't miss”. Think about how activated you were and place it on the number line. Ex. “7 is where I find my best performances. I feel confident and unstoppable, I do not even think about the competition, I am just playing”.

Now think about what happens when you get slightly over activated, how can you tell when you are beginning to get a little too worked up? What about under activated, how do you feel when you can tell you are maybe to calm or easy going. These are the numbers that are right next to your peak performance and what create your optimal zone. Ex. “At an 8, I am still playing my best, but I can tell I'm speeding up a little too much, I need to bring it down slightly. Take a deep breath and refocus.” “At a 6, I realize that things are going well, but I am starting to coast a little, I need to keep the pressure on my opponents.” In this case the IZOF (individual zone of optimal functioning is between 6-8. If you train yourself to be able to stay in YOUR zone, you will have more consistent and composed performances.